On February 27, Impark proudly announced its collaboration with The Forward Movement, a Canadian advocacy group campaigning for the support and adoption of the Dynamic Symbol of Access (DSA). This collaboration encompasses Impark’s adoption of the DSA as standard for all new facility painting projects in Canada, along with a renewed commitment to providing barrier-free parking nationwide.

The Forward Movement was co-founded by urban interventionist Jonathan Silver and social innovator Dylan Itzikowitz, who were stirred by calls for change taking place south of the U.S.–Canadian border.

“We were inspired by an American organization called The Accessible Icon Project,” Dylan explains. “They’re design activists who designed the Dynamic Symbol of Access to raise money for a disability charity in Massachusetts.

“Jonathan and I read about the project and this symbol and thought it’d be a great opportunity to bring it to Canada. But where they were using the change to fundraise, we wanted to use the change to promote the importance of creating an accessible province [Ontario] and nation.”

The Forward Movement officially launched in January 2017. Since then, it’s gained the support of over 70 disability charities, 12 cities and jurisdictions, and one gold-medal-winning Paralympian.

“We talk a lot about inclusion in terms of gender or religious inclusion, which is obviously really important,” Dylan says, “but I think what is less talked about is inclusion for people with disabilities. We wanted to bring that to the forefront as an issue that’s perhaps marginalized more than others. Any time we can bring that conversation to the forefront, we’re building momentum towards a more equal society.”

“The difference between two icons like these was so striking to me that I couldn’t believe the second one (and others that are closely similar) wasn’t used more commonly.”

Sara Hendren, The Accessible Icon Project, An Icon is a Verb: About the Project

After obtaining permission from The Accessible Icon Project to launch their own advocacy group in Canada, Jonathan and Dylan began building momentum approaching disability organizations for social media endorsements, which they quickly accumulated.

“Once we had this network of endorsers, we realized we could start running events with them,” Dylan says, “so we held painting events in parking lots as a way of bringing people together and having a conversation about our message: person first, ability first, inclusion first.” 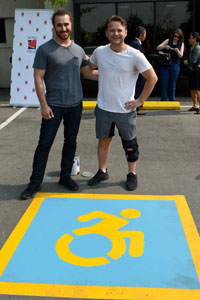 The parking lot may seem like an unusual venue for activism and social innovation, but for The Forward Movement, it’s been an invaluable platform for community engagement. “Painting the parking lot is a great way to bring people together and engage with the change itself,” Dylan says. “It allows people to take ownership and say three things: One, ‘we want more.’ Two, ‘we want better,’ and three, ‘this is our movement too.’ And the parking lot has allowed us to do that much more than, say, changing washroom signs, which is limited to ordering new signage.“

So far, the movement has held seven painting and ramp building events at children’s hospitals, athletic facilities, and health clinics. The next painting project is scheduled for spring 2018 and will be Impark’s first application of the new symbol.

But parking lots have also had another, serendipitous impact on the movement.

“We identified that the law only applies to erected parking signs, not the parking sign on the pavement,” Dylan explains. “So organizations can and have been able to use our symbol and promote our cause anywhere that the old symbol is not legislated — all while we work with provincial and federal governments to change legislation.”

Design is, by nature, a labor of preference, and Dylan understands that some people hesitate when they first see the symbol. “The symbol’s not perfect. No symbol can be,” he admits. “Not everyone who requires barrier-free accommodations is a wheelchair user, and not everyone who uses a wheelchair can propel themselves forward. But we chose this symbol because there was precedent and because we believe that it illustrates a message of autonomy. It’s not meant to say, ‘everyone with a disability looks like this.’ It’s meant to shift the focus from a person’s disability to their ability and to them as a human being.”

To them, the challenge was to strike a fair and constructive balance between what already existed and what they wanted to communicate. “The reason we kept the wheelchair is because it’s based on the International Symbol of Access, which allows people to easily identify barrier-free access — what’s a reserved washroom, what’s a reserved parking spot, and so on. So, advancing some incredibly inclusive and innovative design could’ve had a lot of repercussions for people not knowing how to find the services that they need.”

Reaching out to Impark

With the support of the disability community behind them, Dylan and Jonathan began approaching companies they felt could make an impact. In the midst of arduous negotiations, it was a pleasant surprise when Impark in fact approached them.

“We’ve been in conversations with a few large-scale corporations, but Impark is the first to actually go through with the change,” Dylan says. “The more people who see the symbol, the more it can serve as a catalyst for conversation, so it was so important that a major player like Impark agreed to — and genuinely wanted to — use the symbol.”

The details of our first painting event in collaboration with The Forward Movement will be released soon. Follow us on LinkedIn to receive updates on our progress.